The glorious Grand Coulee Scenic Highway was probably a marketing ploy devised to push the much needed highway on taxpayers, tourists and uneducated politicians. The Scenic Highway itself comprised of three different highways; starting as a branch off the North Central Highway near Soap Lake, it ran down the lower coulee past Sun Lakes, up the cliff, then past Dry Falls where it connected with the Sunset Highway into Coulee City, leaving as the Speedball Highway and running to the cantilever bridge in Coulee Dam. The scenery along the way is hewn in shale and granite, with coulee walls that tower over head on great columns of basalt. Numerous waterfalls and seasonal lakes run almost the entire upper coulee, while the lower coulee is filled with lakes and beds of alkali. This was the land of the first people, and later the pioneers.

At first the lower coulee road wasn’t paved, it was dirt and gravel. The Speedball portion was paved from the beginning in anticipation of heavy traffic and big trucks with even bigger equipment. At first, the lower coulee portion only ran as far as Park Lake, and suffered several construction set backs, but finally the road was constructed and in use. It took the coming of the President of the United States, Franklin Roosevelt, before the people decided to oil the roads. But it wasn’t the only change that happened to the Grand Coulee Scenic Highway. Having served its purpose, the name started to fade away as both highways started to gain their own identities.

By the 1950s everything had been paved but the state was on a mission. The cars were rapidly changing, becoming more powerful, big and bulky, the highways also needed to be changed to accommodate them. By this time the Speedball Highway’s days were numbered, it’s replacement already completed, the Speedball Highway was abandoned and sunk beneath the waves of the equalizing reservoir known as Banks Lake. In the lower coulee the highway was being changed with the straightening of corners making the highway much more compatible with the large hunk of steel cars being made in the 1950s. Most of the real drastic changes happened around Park Lake. The old highway used to skirt down the same side of Blue Lake that it does now, this area isn’t very much changed, just widened and straightened. As the old highway approaches Park Lake a new route is formed starting at Whiskey Rock. The Highway used to run behind the rock, which gained its name by being a popular spot to smash whiskey bottles, as well as more than one car wreck blamed on the drink. From here the old highway would veer behind Park Lake, run past Willards Resort, now owned by Laurents, and run through where Sun Lakes State Park is now, but with the straightening the road was moved to the other side of the lake, away from the resorts and parks. By doing this the state could straighten the road up the cliff side, eliminating the switchbacks, which they did. Parts of the old highway can still be found in the Sun Lakes area, behind Whiskey Rock and on the 400 foot ascent to Dry Falls. The state has reclaimed the portion of the old Scenic Highway that runs between Laurents Resort and Sun Lakes State Park preserving it as a trail that every year thousands of tourists still travel down. 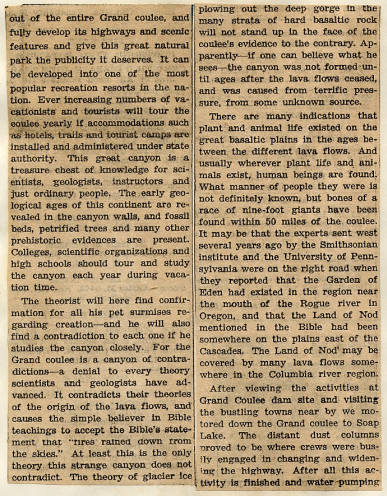