It’s a question that comes up from time to time: “If 81 men gave their life during the construction of the Grand Coulee Dam, where is the memorial?”

At one time there was a grand monument carved out of marble, on it a brass plaque engraved with the names of the first 46 men who paid the ultimate price in the name of progress, with room for further names to be added as progress swallowed up more lives. It was one of a kind commissioned piece of art by Colville artist John Citkovich. The whole thing stood between 10 and 15 feet high and was carved out of solid granite shipped in from Georgia. To make the tight Memorial Day dedication Citkovich worked long days into late nights. When he was done the monument was delivered by him and his crew under strict secrecy into Grand Coulee. The whole project was funded by the American Legion.

The 1938 Memorial Day celebration lasted three days and was attended by Governor Clarence Martin. There was a free BBQ, live music, and a ‘sham’ battle which drew almost as much attention at the Memorial Dedication Ceremony. While it was all going on work chugged right along at the Dam making it another attraction for the hundreds of tourists. For all his hard work Citkovich had just been paid a retainer, so he went home and waited. A year went by, and then two. Finally, Citkovich heard from the American Legion, and they wanted to settle on a much lower price. It was the final straw for Citkovich who had run out of patience, after all, the Great Depression was on and money was scarce, which was probably true on both sides of this story.

Citkovich decided if anyone was going to get the monument at a such a cut rate price it was going to be people he knew, locals in Colville. One night he loaded his truck with his crew and under cover of darkness they drove out to Grand Coulee Dam, and under the light of the moon removed the statue and loaded it in the back of the truck. Story has it they were expecting trouble, so they brought guns and had a couple of the boys standing as armed lookouts while the rest went to work dismantling the monument from its base and loading it into the truck, all under cover of the night. Then, just as they brought the monument down into the Coulee they escaped with their prize back to Colville.

The next day when Grand Coulee woke up the reaction was more of a “something looks different” than “Oh My God, where’s the monument?” It took a couple days before anyone really noticed or said anything and by then the trail was old and cold. The monument was gone.

That was 1940. Decades passed, the whole issue had been mostly forgotten, and then in May, 25th, 2014, seventy six years later, to the date no less, the Spokesman Review released a story about the missing monument: “Forgotten sacrifices Grand Coulee Dam Memorial found in Colville.” in it the author Daniel Person introduces us to John Citkovich and tells us the story of the missing memorial, but then goes a bit further to show us were it is today. On his deathbed John confessed the whole story, and now the memorial sits in Colville where it is a memorial for fallen Stevens County Veterans. According to the article the brass plaque that held the 46 or 48 names is long since been gone, but there is one small plaque that mentions the Grand Coulee connection that is covered up. It was a very interesting article and it got people talking again, but just not enough of the right people and once more the topic of the memorial started to gather dust.

In 2016 Jacob Miller, a Reclamation Guide working at the Grand Coulee Visitor Center, presented to date the only working memorial for the Grand Coulee Dam fallen workers. Unveiled under less auspicious events than the original memorial, Jacob’s version holds more than just names, it also includes background history, and cause of death for the morbidly obsessed. The Memorial is located at the Visitor Center in Coulee Dam. Jacob is always looking for more stories and information on the 81 fallen workers, their lives and accomplishments, and claims to have identified an 82nd victim of the Grand Coulee Dam construction. 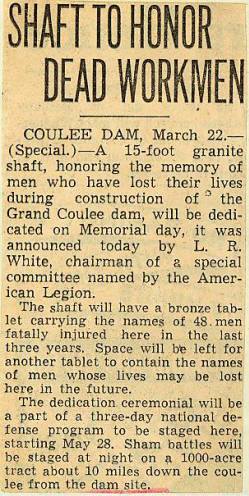 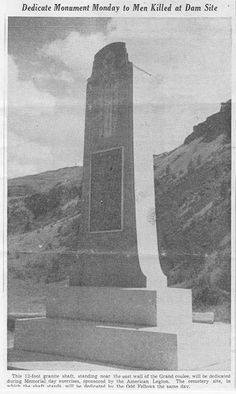 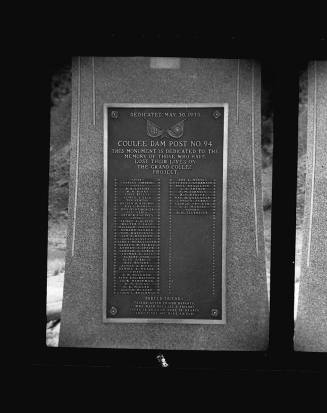