Vic Meyers was born Victor Aloysius Meyers in Little Falls, Minnesota, September 1897. His father was a politician and his mother an accomplished pianist. At first Vic picked up the drums, and by the age 16 he could play any instrument, filling in with local bands. His family moved to Seaside Oregon and Vic continued to play with bands in hotels. In 1918 Vic put together a 10 piece jazz band and the following year received a contract at the Rose Room in Seattle’s Hotel Butler. Vic’s jazz band enjoyed local success that flowed right into the Roaring 20s. In 1923 Vic’s band was discovered by Brunswick Records, and labeled “Vic Meyers Hotel Butler Orchestra” a record was produced and the following year a national tour. Back in Seattle after the tour, the band played live on Seattle Radio.

In 1927, the Vic Meyers Band took up residency at the Trianon Ballroom in the downtown Denny Regrade area. The Trianon Ballroom was not only probably the best known dance club at the time, it also had a reputation as being a Speakeasy where people could drink, dance and party despite Prohibition. That same year the Vic Meyers Band signed a contract with Columbia Records to release a series of recordings. The record contract lasted until 1929 and by 1932 Victor and his Band had their own establishment in the Denny Regrade area called Vics that was constantly in trouble with the authorities due to Prohibition laws. Vic was somewhat of a public figure, the press would follow him around like paparazzi, notepads in hand, question in mind.

1932 was a local election year and in the spring election the position of mayor was up for grabs. To spice up what seemed like was going to be a lukewarm race between two milk toast candidates, the Seattle Times came up with a great idea. To draw attention to the election they decided to lampoon it and Vic Meyers, scallywag of the news, was called in to run for mayor with full front page and often daily coverage. When the people saw that prohibition breaker Vic Meyer was running for mayor all eyes turned to the Seattle Times and the boys in editorial knew they had a winner and ran with it. Vic was suddenly put into a bunch of elaborate publicity stunts; once he showed up at a party on a goat, another time in a parade he openly flaunted the prohibition laws. The platform he stood on was sensationalism and his running slogan was nonsense, but the public loved and followed his antics almost exclusively in the Seattle Times. All the rival papers could do was watch, and complain that the Seattle Times was un-Americanly sabotaging and degrading the whole election process. A complaint that didn’t fall on deaf ears, Vic had long been a leader and was used to the spotlight, and believed his political ideas were as valid as the next candidate, he started to take himself seriously. As the election day started to roll around people wondered if this man who entered the race as a joke, but then turned serious had a chance. It wouldn’t be the first time an underdog took an election. When the ballots were all counted, Vic Meyers finished sixth in the spring Seattle mayoral race.

Getting a taste of the political life in the 1930s was a calling for Victor Aloysius Meyers, and by fall he was running for Lieutenant Governor of Washington State. As the story goes he was originally going to run for Governor but when he arrived to file he found out the filing fee was 60 dollars. He then asked if there was anything under 20 dollars and the man behind the counter started running down a list of available positions, when he got to Lieutenant Governor for 12 dollars Vic said something like “Stop! I’ll take it!” and paid the man the 12 dollar filing fee. Vic dropped his old running partners, the Seattle Times, and with a mix of humor he took up issues in support of the people, with the right combination of local issues and showmanship he easily won the Democratic nomination and became the running mate of Clarence D. Martin, who was running for Governor. It was 1932 and Democrat Franklin D. Roosevelt won the presidency by a landslide that also carried Meyers and Martin. Now Governor Clarence Martin and Lieutenant Governor Victor Meyers had to work together, something they often struggled to do, sometimes leading to more sensationalism in the news. For Victor the job meant a paycut, he was making more money with his band then he was as Lieutenant Governor, so he made up for the income difference with state spending, something he would flash around flamboyantly and then get called on. He would never deny that he spent state funds like a rich girl with daddy’s platinum card. The people, however, seemed endeared to his antics and in turn he tried to repay them with things he thought would aid the community like medicare, unions and education. Even though he had garish ways of doing it. The people loved him and he spent the next 20 years, from 1932 to 1952 as Lieutenant Governor of Washington State.

In 1945 Vic became a member of the Parks and Recreation Committee, and when it became the Parks and Recreation Commission two years later Vic was its chairman. During this time Vic campaigned for public support in the building and expanding of Dry Falls State Park into the lower coulee along the shores of Park Lake. One of the changes he wanted was the renaming of the state park to Sun Lakes, a name he felt was more descriptive of the Park Lake area. This idea was met with some resistance, Dry Falls had been the name of the State Park since 1933, and before that, the name of the chasm. But an even bigger issue was the cost and location. The cost of acquiring the land and then actually building the state park was phenomenal for the time, and then there was the location. By 1947 the Grand Coulee Dam wasn’t quit the booming tourist attraction it was pre-WW2. Even more controversy came about with some of the land owners raising questions of legalities. Soon, the papers started to pick up circulating rumors. It didn’t help that Vic himself would show up in the papers usually doing some silly publicity stunt. Once he showed up with his State owned Cadillac, the back was filled with manure and a shovel. Soon the whole mess was labeled “Vic’s Folly” by the media; a silly waste of time and money, and the title stuck. Vic’s Folly was what the Sun Lakes project was referred to by the media and increasingly, the people who were now starting to laugh at Vic as much as with him. Bulldozers, however, pushed through the Park Lake area changing the landscape, adding and subtracting, and of course not everyone was happy about it, sentiments that can still be heard over 50 years later. The whole movement against building Sun Lakes really didn’t turn out to be much more than people complaining out loud, some for legitimate reasons, and by the 1950s when road trips, beach parties and outdoor recreation were all the rage, Sun Lakes was too big to be stopped.

Vic returned to the coast and renewed his focus on politics with mixed success. In his later years he was referred to with derogatory names like ‘the clown prince of politics’. As time progressed and his health and reputation began to fail, he started to avoid the spotlight more and more, once in a while a historian or newspaper would come around to visit, but he became largely forgotten or just a name on a lake, golf course or plaque. By 1990 he was living alone in a nursing home when he was given the surprise of a lifetime. In a wheelchair, but still lively, he was surrounded by family and local jazz collectors, the room filled with old Prohibition era posters and the air filled with the sounds of Vic Meyers Hotel Butler Orchestra. Maybe for the last time the flappers danced while the ‘shine flowed and Victor rode home in the back of a state Cadillac… during his life Vic Meyers rose from media scallywag to prominent politician, and despite the naysayers, expanded Dry Falls State Park down into the lower coulee, around Park Lake, just like he said. A few days after the party at the nursing home, Victor Aloysius Meyers passed away, leaving Vic’s Folly, Sun Lakes State Park as his legacy for all the people to enjoy. 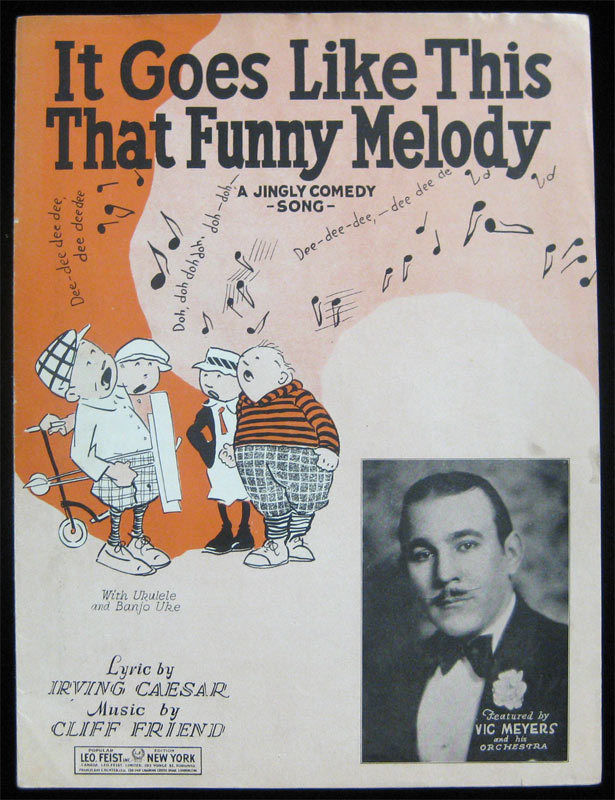 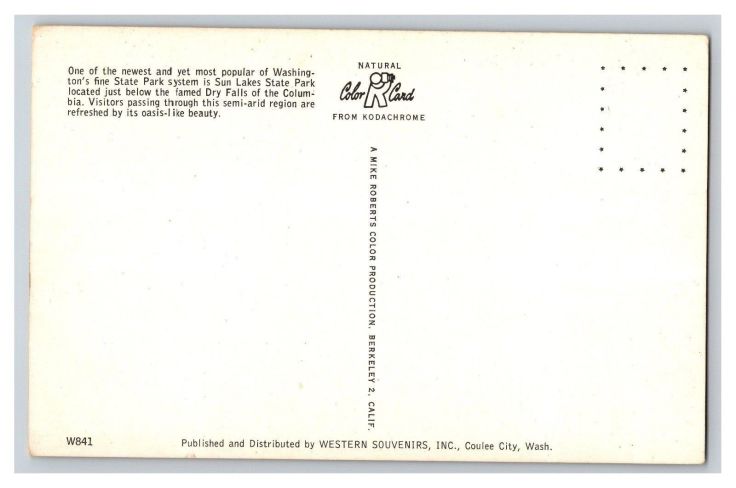 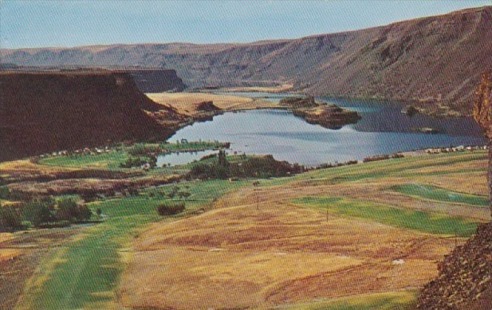 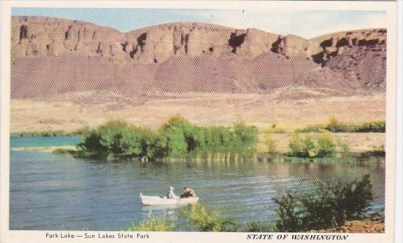 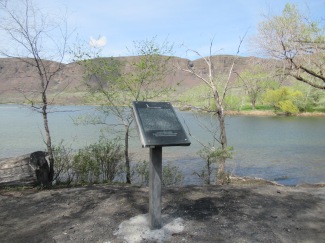 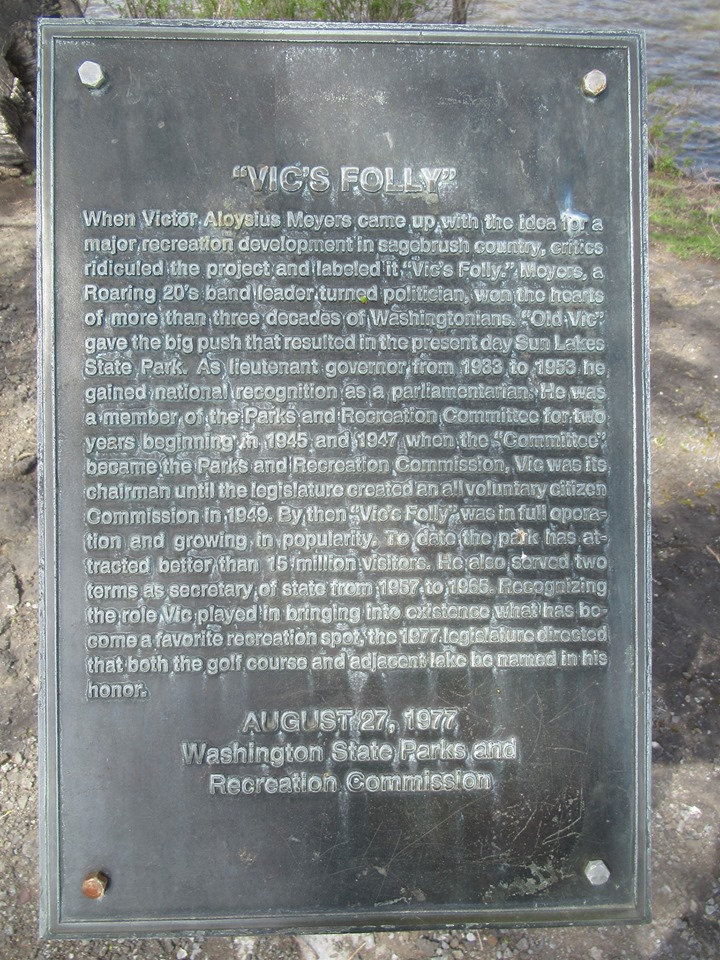