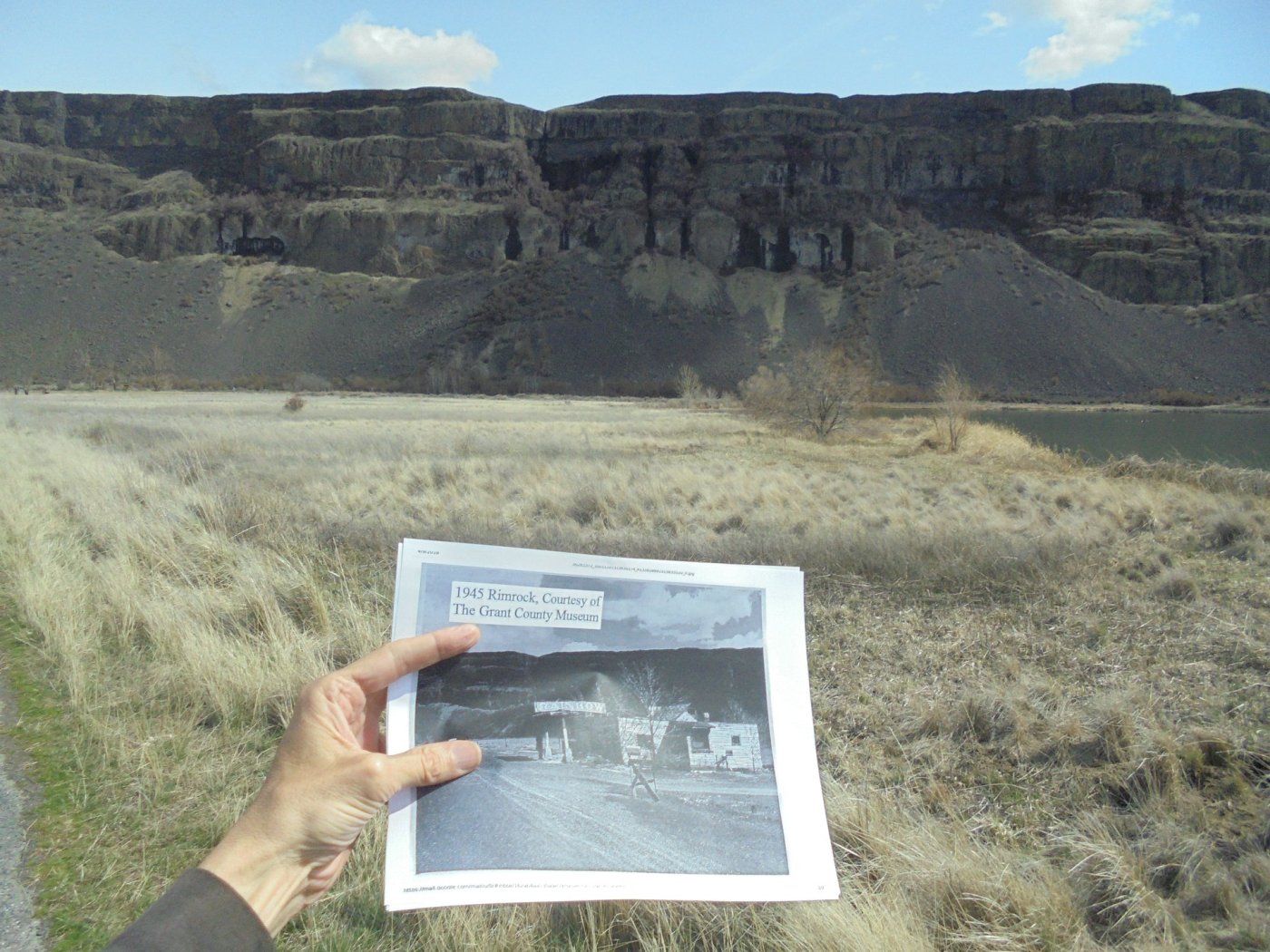 It all started for me with the Speedball Highway. This road of yesterday ran down the coulee from Coulee City to Grand Coulee. It was for many the road of dreams, taking them away from the Great Depression of the early 1930s and to the land of economic prosperity: The Grand Coulee Dam. But not everyone was interested in working for Uncle Sam building what would come to be called the 8th Wonder of the World, mixed into the migrating working stiffs where the speculators. They would buy land, plot it off and start townships. Many of these towns were much less than what you would imagine, in fact, most were little more than a few houses and a gas station usually with a cafe attached. Several of these townships sprung up like mushrooms along the new Speedball Highway, one named Rimrock was famously “in the shadow of Steamboat Rock.”

I always suspect that under someone’s bed in a shoe box lays the answers to all my questions, that is if each picture is worth a thousand words. When I talked to Edith Lael she fondly remembered stopping at Rimrock with her family for ice-cream on hot summer days. Nestled next to Steamboat Rock and virtually surrounded by water falls, the halfway mark was a popular stop for travelers. They would pull up to the Shamrock Cafe for a grilled melt, fresh jerked soda or tank of gas if needed. It was, after all, the 1940s. Rimrock was constructed in or about 1934 in the Steamboat Rock area. Steamboat Rock at that time wasn’t surrounded by water like it is today, instead it stood a pillar in a landscape full of sagebrush and granite boulders. There was plenty of water from nearby Devil’s Lake on one end and Tule Lake on the other, closer to where Rimrock was situated. In the 1940’s Steamboat Rock already had a loosely knit community of homesteaders that were mostly ranchers or farmers living on either side of the basalt monolith. Down the side we now refer to as the front ran the U.S. Construction Line and the Speedball Highway, up past the Devil’s Punchbowl and on into Grand Coulee to the Dam itself, about 15 miles away. On the back side was Barker Canyon, which contained part of Devil’s Lake as well as several farms. By the late 1930s the small community that had existed at Steamboat Rock since the days of the pioneers slowly started to merge with Rimrock into one community. The old Steamboat Rock school was moved closer to the line of poplars planted by earlier homesteaders, closer to the Rainbow Cafe that for several years in the 1930s solely made up the township of Rimrock. From time to time Rimrock made the news, but the small community never really took off other than being a place for old homesteaders to meet with the coffee klatch or travers to stop on the way through to more lively destinations. Around 1950, approximately 15 years after Rimrock came into being it was condemned by the U.S. government and all 30 residents, including nearby homesteaders, were forced out. In 1951 the area around Steamboat Rock was flooded with the equalizing reservoir. As it turns out not all the land that Rimrock sat on was flooded, and bits and pieces of the old township can be still be found by a sharp eye on a lucky day. 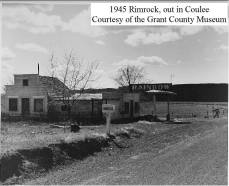