The whole world was broke it seemed, and no one could spare a dime, but the Grand Coulee Dam was in full swing, lining the pockets of workers and merchants with disposable income. B Street exploded and out into the muddy streets fell all types of people from all walks of life, and all suddenly richer than they had been in a long time, in fact, maybe their whole lives. It was about 1936, or maybe 1937. The construction of the monumental dam in Grand Coulee was well underway. It was an exuberant time, a time to try new things and live on the cutting edge. They froze the earth, installed the world’s largest conveyor belt and broke record after record with concrete pours. They carved a railroad down the coulee, and built electrified cities overnight. It was an incredible time filled with people who believed they could do anything with success. Everything was brand new; the bridge, walkways, highways and even the landscape was changing daily. To help patrol it all Washington called in the State Patrol and made a nice new office in Mason City for them to reside. The State Patrol wasn’t happered by city limits and could operate anywhere the law needed to be enforced or the public needed served. One of these officers was Frank McGinn. Frank was a rough and tumble sort of fellow, just the type of law enforcement you would expect from the wild west, and believe me, it was wild. Often Frank would get called up to B Street to settle disputes, usually involving alcohol and the wild excesses of people coming into sudden money. It was on B Street that Frank McGinn would meet up with Wenatchee Daily World reporter Hu Blonk. The two became acquaintances with stories of them being seen sharing a drink, or Hu seeking him out in Mason City.

This is probably a story that Frank McGinn recounted to Hu Blonk during some down time, but was later backed by evidence when a photo was found and printed in the Wenatchee Daily World decades after it was taken. It goes something like this. It was probably a beautiful sunny day when an unknown pilot of a small Taylor Cub airplane approached Frank McGinn for a trip by plane down the coulee. Taylor Cubs were small two seat 4 cylinder prop planes that were used for surveying as well as recreation. In the 1930’s the landscape was dotted with landing strips, and small aircraft were employed for deliveries, surveying the land, and even just commuting. Frank climbed into the crowded single engine plane and pretty soon they were soaring high above the coulee floor. Down below they would be able to see the old Speedball Highway winding its way through the endless sage past decade old farm houses and newer boom townships. It’s hard to say where the plane took off from or was headed too with all the landingstrips, but the final destination was clear. As they approached Steamboat Rock from the south someone managed to snap a picture of the huge mesa, Devil’s Lake can be seen shining in the background. Since it was a two seater and someone had to be flying, it leads one to believe the picture was most likely taken by Officer McGinn, but there is no evidence to support this. As they approached Steamboat Rock the decision was made to land on top. Down towards the mesa the plane descended, inside I’m sure was a tense moment as everyone checked their straps and said their prayers. Steamboat Rock is not flat on top. There are a few small field like areas, but they are smattered with boulders and in most places sheer chasms and steep basalt cliff walls, making landing not only hard, but near impossible. It was probably more of a loud crash landing as rabbits and snakes darted for cover and dust, weeds, small plane parts and cuss words filled the air. I doubt the plane took off from the place it finally came to rest at on top of Steamboat Rock. There is no record I could find of how the plane was removed, or why the pilot chose to try such a risky landing. Many decades later an aerial photograph of Steamboat Rock was found. On the back of it was written “I was in a Taylor Cub plane which landed in the foreground. (Very silly trick not my idea). The only time it was done.” 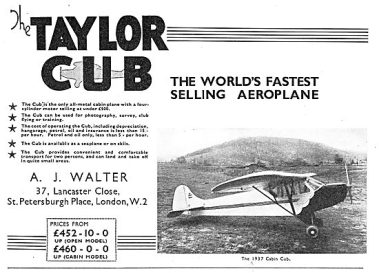