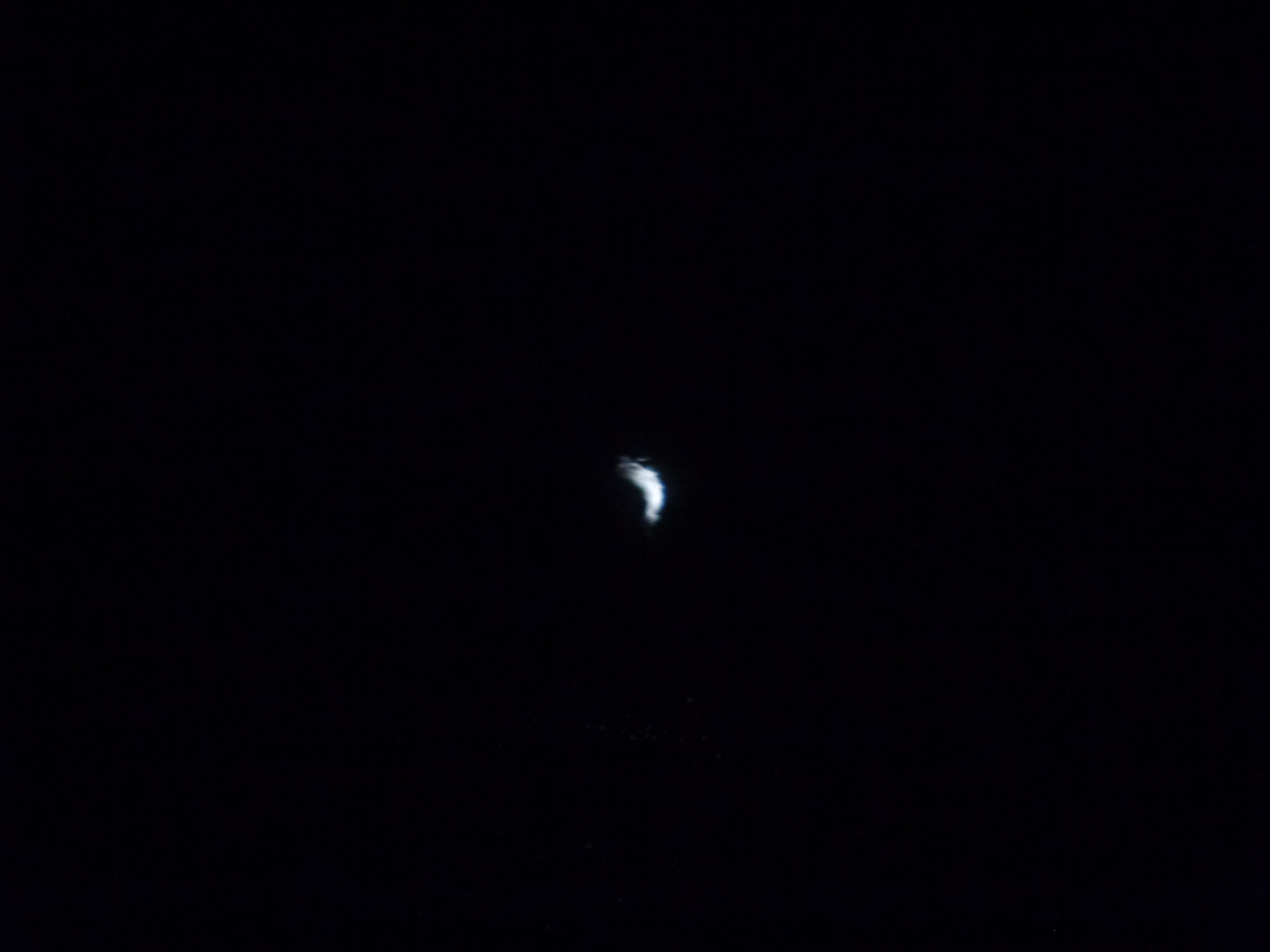 Back in 2016, a story about Coyote had been haunting my thoughts, in it Coyote had stolen the moon. It seems the moon was a much desired prize at night because it could light the way through the darkness, and belonged to the Antilope Brothers who lived in a village alongside the Spokane river. I had been reading it in a book called “Children of the Sun, a History of the Spokane Indians” by David C. Wynecoop that my Grandmother gave me. In it the Antilope stole the moon from where it sat every night, and with their lightning speed escaped back to their own village. They entered their teepee to eat and drink and celebrate their victory, but just then Coyote came along and spied the moon sitting outside the lodge unguarded. Such a shiney prize must be stolen, and so Coyote snatched it up in his mouth and ran off through the woods. Inside the teepee the Brothers noticed the shadows changing on the wall and when they went to investigate saw Coyote dashing off into the woods, his mouth a glow with moonbeams. The Antilope Brothers gave chase through the woods, so Coyote moved down closer to the river. In the river the moon’s crescent reflection could be seen, grinning in Coyote’s mouth like a cheshire smile; moonbeams shot out everywhere lighting up the woods. Coyote raced on, now just a couple heads away from the quickly gaining sure footed Antilope Brothers. Coyote stumbled a little on the river rocks and could hear his own breath outracing him, he was winded and knew he couldn’t win, so with all his remaining strength he heaved the moon as hard and far as he could out into the river, where it reflected up into the sky. And that is where it remains today.

The Antilope Brothers were not impressed. Skidding to a halt a few feet away from Coyote. Killing him would do no good, for he would only be resurrected again. For a while the Brothers considered throwing Coyote into the swiftly moving river, but in the end just shrugged their shoulders and returned to their teepee. 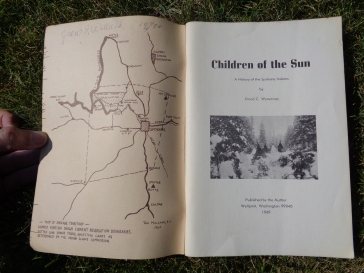 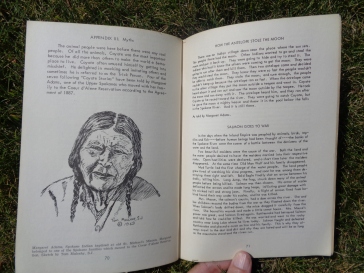 The story played in my head as I packed up Blue with camping gear, my Brother and Nephew, and we drove to Bowl and Pitcher State Park for a couple days. It was in early summer and the Spokane River was running green and white, crashing over rocks with a tremendous fury. We all decided to unpack the bikes and hit the trails. We crossed the foot bridge, up the stairs and veered down the trail to the left. We could see there was also a trail to the right and a little roofed fire pit / picnic area. The left trail was rocky and rough. In a couple spots roots ran across it, and it was easier to push than to ride. It was the kind of ride I like, challenging, although a bit bumpy. We continued on the trail, eventually it rose up and dropped back down. We traveled on about a mile or so before backtracking and returning to camp for dinner. It was already getting late and everyone was ready for a fire and some food. Since the clouds were low the night was black, there was no moon or stars that could be seen. Here and there voices of campers and camp fires could be seen flickering in the background, and it wasn’t cold. My Nephew and I decided to go for a little night time bike riding and jumped on our BMX bikes and headed down towards the river and foot bridge. There was no external lighting, and the complete blackness of the night made everything surreal. We rode out on the bridge, below us we could hear the river moving, rushing, pushing, raging, just below our feet. Earlier in the day I was fooling around and almost lost my bike into that swirling green mass. We rode back off the footbridge and up a little hill, sticking to the road because of the darkness. We passed by some trees that cut off our view of the river until we got to the top. Suddenly on the other side we saw a light on the trail. It was blue / white and shone on the trees as it moved along, bobbing up and down only very slightly. Must be a hiker on the trail, we though, but then it seemed to go around a corner and now was shining up into the trees and moving faster than a hiker. Maybe it’s a biker? or a quad? I thought watching this single, bright light lighting up the trees and heading towards the footbridge at the bottom of the hill. “Come on” I said to my Nephew and we turned our bikes around and started down to meet it at the bridge and see what it was. I was thinking a maintenance person on a quad, but at this time of night? I figured they would cross the bridge and we could watch from the already dark shadows. Since it was so dark, we couldn’t ride full speed and the light started to pull away, then we had to go past the trees again. After we got past the trees the light had really pulled away in front of us and we could see it go straight past the turn to the footbridge and disappear around a corner. By the time we got to the footbridge it was gone. We once more turned around and started home, neither one of us sure of what we had seen. It was a single light, like a spot light, and it moved fast and steady, maybe it was an extreme mountain biker? or maintainance gator? 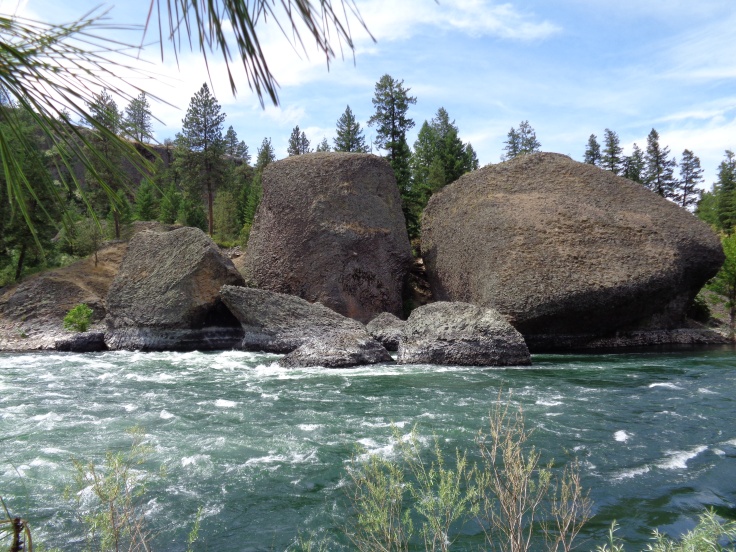 The next day we went to investigate the trail, but didn’t find anything special, but that doesn’t mean there isn’t a hidden road or something we can’t see. We started back to camp when I saw an information kiosk. I hadn’t noticed it the previous day, it was the story of how Coyote stole the moon from the Antilope Brothers, and his daring run down the river to where the moon was cast, forever in the sky. 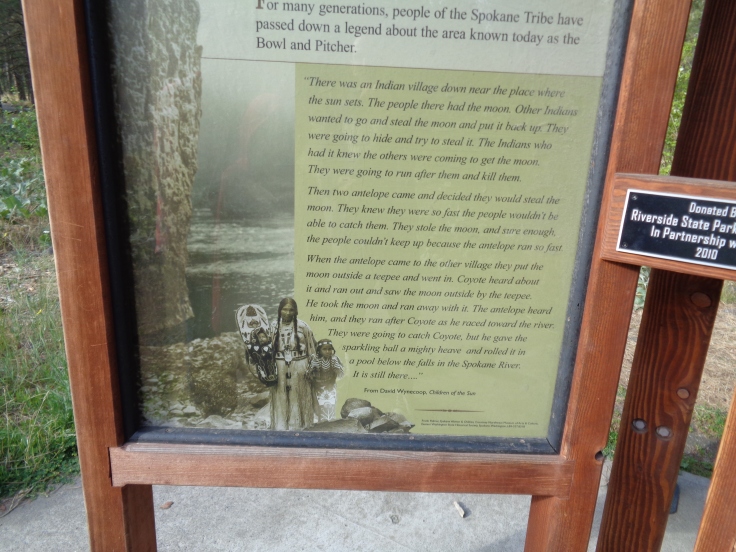