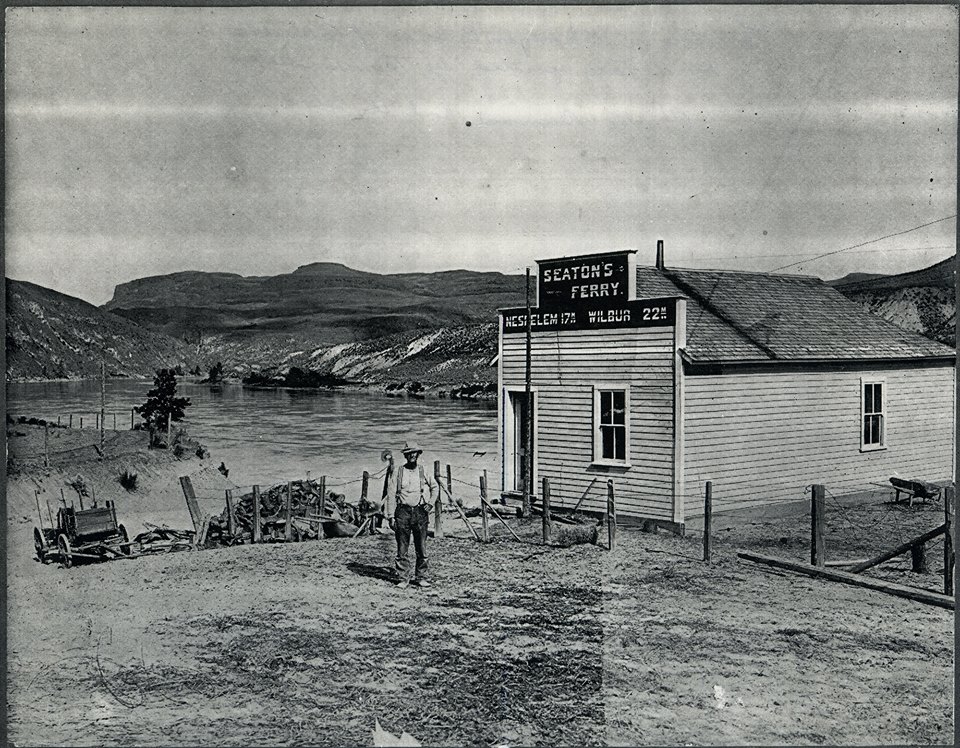 In 1889 Thomas Brownfield Seaton brought his family to Spokane on an immigrant train from Cass County, Missouri, bought a covered wagon, and continued Wilbur, where the family stayed with relatives (including nephew Robert Van Sickle) while Tom located a homestead at Hesseltine in the Broadaxe Creek area a few miles north. Tom developed a small farm but also a general store that included a post office where he became postmaster. For a while Tom, his wife, three sons, and two daughters lived and the children went to school here. Among other homesteaders in the area was Samuel C. Rinker, whose son Washington “Wash” Rinker married Tom’s eldest daughter, Cora, in 1895. Cora’s mother, Minerva Aldridge, had died two months after Cora’s birth, and a year later, Tom married Mary Ellen Longacre.

While in Hesseltine, Tom heard about the government opening mineral mining claims on the Colville Reservation on the other side of the Columbia River. He took up a logging claim and in 1898 or 99 with the help of his sons Bailis, Sam, and Elmer, a team of strong work horses, a plow, shovel and pick created a road that ran down over the hill and to the Mighty Columbia River to about where Spring Canyon is located. Here with the help of his boys he built a cable ferry. A very simple barge type boat by today’s standards, it was held and propelled across the river on a cable strung from the Lincoln County side to Swawilla Basin on the Colville Reservation side. The plan was then to follow an old native trail into Nespelem. The ferry was one of the first on that part of the Columbia, and ferried people, livestock, mining equipment and supplies. The ferry and roads were a great success. Before long a small community sprang up around Seaton’s Landing that included a small general store, post office and eventually a restaurant that also served as a four room halfway house. Back in the late 1800’s early 1900’s it wasn’t uncommon to see a steamboat making its way up the river moving some sort of cargo. The men of the cargo boats often stopped and stayed at the halfway house to get a rest. Bailis, who had taken over the original homestead near Hesseltine after the building of the road, died in 1905 at the age of 25.

The store became almost like a trading post just across the river from the Colville Reservation, home of the well known Chief Moses. Both the Chief and his people frequented the store and were friends with all the Seatons. It is reported that Chief Moses once told Tom that since half the ferry was on the tribe’s side they should ride for free. To this Tom jokingly responded that the tribes could ride for free but would have to get out and walk at the halfway mark. Some say it was the only time Chief Moses had ever been recorded laughing, at Tom or with Tom is hard to say, but in the end a deal was struck that the tribes could cross at half fare.

As the children aged middle son Sam Seaton married and moved upriver around Plum to start his own ferry about 1912. His younger brother Elmer eventually took over the operations of the Tom Seaton Ferry from Charlie Dumas and his wife; Elmer’s sister Bessie. Elmer ran it for many years alongside his wife until it became better known as the Elmer Seaton Ferry. Meanwhile upriver, Sam was doing well with his ambitions. He had ferries in two locations on the Columbia, one just up a few miles from his brother’s ferry named the Sam Seaton Ferry, and a motorized ferry at Plum just outside of Sherman. Plum is now under the water of Lake Roosevelt, most of the places mentioned here are.

It is said that upriver around Fort Spokane a bridge was torn down and the lumber allowed to float down stream where Sam Seaton easily caught the discarded wood, selling some off, he made his house out of the rest. Finally in 1920 the day came when Grant County made a automobile road into the coulee that lead to where the future dam would be. At the river the Grant County Commission placed a refurbished ferry to get the cars across and named it the Grant County Ferry. Sam got the contract to run this ferry so he carefully disassembled the house he made from the salvaged bridge lumber, created a raft, loaded all his belongings and told his children to stay towards the center as they traveled down the Columbia to Elmer Seaton’s where they stayed until a new house was built from the raft. Sam built his house directly where the Grand Coulee Dam sits today, an oversight that caused much dismay later. Eventually Sam reluctantly moved off his land in Coulee Dam to some property a few miles downriver which became known as Seaton’s Grove. Elmer City is named after his brother Elmer Seaton, who owned a ranch in that area.