It was a mild winter in 1885 when newly weds Hans and Matilda Lange loaded up their wagon and made there way from Colfax towards the Grand Coulee where they planned on starting a ranch and raising cattle. On her finger Tilda, as they called her, wore a gold band made from ore struck by Hans himself in an early time when he was a miner. Now, on their fourth night of travel cold and darkness was settling in, arriving on a bone chilling north wind. It was early December and there was no way they would beat the sunset down the coulee to their final destination at Steamboat Rock. Hans had earlier in his adventures eyed the Steamboat Rock region when he was traveling through and it had always stayed in his memories as a truly remarkable and unique place filled with promise. The Colfax area was filling with fences and wheat farmers, making it harder to range great heads of cattle, but the coulee was virtually empty and had ample luxuriant grass.With the Langes traveled a small herd of cattle and few extra horses. Before they entered into the Coulee they stopped for the night at a place that took lodgers, most likely a halfway house. Since travel was much slower before the invention of the horseless carriage halfway houses were set up around the countryside by people wishing to cash in on weary travelers. They were usually located halfway between two popular destinations allowing travelers to get a hot meal and safe place to sleep.

On that night as Tilda slept in an upstairs room she was suddenly awakened by the sound of raised voices, and thumps; like fists on a wooden table. Suddenly there was a knock at the bedroom door, when Hans got up to answer it he was summoned to go downstairs where the commotion was. Tilda strained but couldn’t make out what was being said, and eventually there was a slam of the door followed by silence. She could hear footsteps coming up the stairs and the doorknob turn. It was Hans. The next day after they had loaded up and were underway she found out that the night visitors were a pose’ and they were discussing the fate of an accused horse thief. They called Hans in as an unbiased opinion since he was new to the area. In the end it turned out the man had a solid alibi, a friend who could vouch for him. In the coulee, the people were the law. There were no sheriffs, deputies, judges or jails. It was the wild west.

​It’s not that it was a wild time filled with wild people, it was just a different time filled with different people. Once before he was married Hans was making his way down the Methow with a group of men when they encountered a group of Natives headed up into the mountains. It was a hunting party. Hans was at the rear of the descending group, and soon he caught the eye of one of the Natives, well, not so much Hans himself but what he had on his saddle; a brand new shiny rifle. In a flash he had the rifle and charged his cayuse up the mountain side. Hans spurred his horse and charged headlong after through the thick brush, trees and into the unknown. Soon he overtook the thief who not only gave back the rifle but offered up all his possessions for his life be forfeit. Reportedly Hans told him to keep all his goods but get out of his sight. When he returned back to the group they were all expecting to hear one or the other had been killed. Hans Lange was a fair and compassionate man, he cared about the world around him and lived in a world he made. When he was 22 he immigrated to the United States from Denmark. Across the pond in Europe and Scandinavia stories of the ‘Wild West’ were popular, and Hans couldn’t resist the lure of creating a new life in the new world. In 1871 he arrived in America, and started working as a hired stock hand, criss-crossing the vast countryside on horse moving huge heads of cattle with people he just met. Later a friend who was mining invited him to Skagit County to search for gold, an invitation he took up. He finally tried to settle down in Colfax where he met Matilda Hoteling, a school teacher. He was smitten and after a courtship the two became married.

(Han and Tilda’s 1st log cabin in the coulee)

​After a four day trip, newlyweds Hans and Matilda Lange settled in their first log cabin just north of Steamboat Rock in 1885, where their only neighbors were the Osborne brothers who arrived sometime earlier. Life on the ranch was not always easy. The winter of 1889 in the Steamboat Rock area was especially long and hard. Hans spent long weeks in bitter cold white out conditions on snowshoes looking for lost herds. Often horses or cattle were found dead. The ones that were alive could barely move and had to be prodded along to water and food. The long winter had made grass and feed rare, driving up prices. It was into these Arctic conditions that Hans Lange and Charlie Osborne ventured with a couple teams of horses and huge bobsleds. Their mission was to venture down to Coulee City for feed to try to save their starving herds. It was blizzard conditions with single digit temperatures and minus degrees in wind chill factor. When they finally arrived worse for wear and feeling frostbitten, they found what they were expecting; over-priced grass hay. Somewhere on the trip back they were discovered by a large herd of roaming or lost starving cows. At first the cattle circled but shyed off when confronted, but soon as their multiple stomachs started talking the cows became more aggressive. As a solution the men dropped small piles of hay… just enough to distract and slow down the cattle. A little further a little more hay was dropped, and a little more. The concern was a stampede, in the snow and cold being trampled out in the middle of nowhere would most likely be fatal. Eventually they found a granite ledge where they stashed the hay to be gathered later after the confused bovine had moved on.

​Starting in the 1890s more pioneers and homesteaders made their way into the Steamboat Rock region. By then Hans had quite the business going on. By horseback Hans would drive the cattle hundreds of miles over seemingly endless uncharted bunchgrass fields and desert settings, swim them across the Columbia River and then over a small mountain pass into Ellensburg where the large heads were loaded into cattle cars and the stockmen paid in cash. It was a five day trip and on the way back the men would sometimes take longer taking in the sights and living off the land, or more likely enjoying their time and money in town.

Some of the people who moved into the area around Steamboat Rock would work seasonally as hired hands doing whatever they could. The Lange’s new neighbors were like this. There name was Morris and they had several children. Feeding so many mouths is never easy and Mr Morris spent most of his time away from home on cattle drives or harvesting, leaving his wife and children stranded at home. Tilda felt sorry for Mrs Morris, being stuck with no help in case anything ever went wrong so she told her to hang a white towel on the clothesline if  help was needed. For a while everything seemed ok with no word from the Morris’ half a mile away. As the time passed, pretty soon Matilda almost forgot about the towel and the Morris’, but one day out of the blue she asked her husband if he ever saw or heard anything from them, they seemed pretty quiet.

“I think they are okay” Hans replied “I saw some laundry hanging on the clothesline.”

Tilda quickly filled in Hans and together they mounted a buckboard and rode over to the neighbors. As they approached Tilda could see the clothesline and on it she could see a white towel hanging.  Sure enough, an accident had occurred several days prior. The oldest boy was chopping wood and accidently cut a couple fingers off. Not knowing what to do Mrs Morris coated the screaming child’s finger stumps in a thick layer of Vaseline and wrapped it all up in cloth bound tightly with sewing thread. The fingers, or what was left of them seemed to be healing up fine and as soon as Mr Morris returned in the spring the family moved on to what they hoped would be greener pastures. Which turned out to be good luck because according to the story the spring thaw loosened a huge boulder that came crashing down completely obliterating the Morris’ cabin.

​Years turned to decades and the Lange Ranch met with nothing but success, growing to eventually cover 1360 acres. Hans and Matilda’s family grew as well, they had four daughters: Christine, Edna, Alma and Dayma. On his land Hans built the house of his dreams for his family and beloved Tilda. It was a luxurious two story house made from the white granite native to his land. In his eyes it was the culmination of a pioneer’s life. In the 1930s and at a ripe old age Hans and Matilda moved into Coulee City. The Lange family continued to live on in the house that Hans built until the construction of the Grand Coulee Dam lead to the flooding of upper Grand Coulee. The Langes house was torn down and the once proud pastures filled with cattle and memories flooded with the equalizing reservoir known as Banks Lake. Before the flooding Matilda had a chance to once more visit her old homestead and later penned this untitled poem.

Upon the sands of Coulee grand.

For ages first its grand profile

From sun to sun gave out its smile.

The eagles perched upon its head;
The rattler o’er its rocks hath sped.
The timid deer, on browsing bent,
(With fear of cougar’s cruel scent)
Far up its wall with nimble feet,
It finds a safe, secure retreat.
Our dear old rock, in splendor still.
Will waters hide thy wondrus rills?
Rock of ages – of time untold.
Will floods again thy form enfold?
Though waters at thy feet may frown.
They can not hide thy glorious crown. 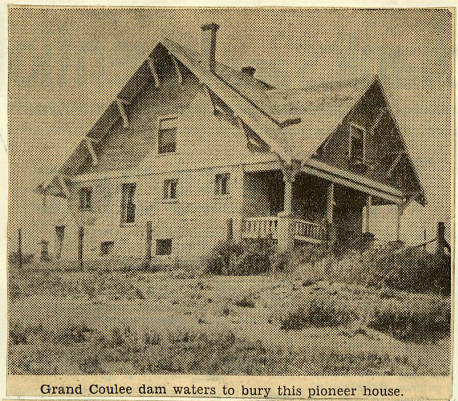